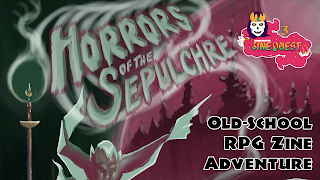 My Zine Quest 3 zine is going to launch tonight! I'm creating this zine with Matt Jackson and artist Del Teigeler. Here's the link to the prelaunch page.

Horrors of the Sepulchre

Hope to see you join the Kicktarter campaign. This old-school zine is gonna rock! 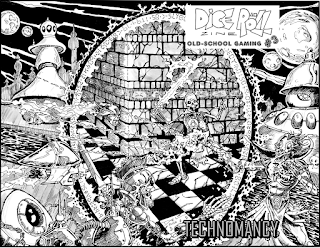 Hi folks! Long time no blog updates. All I can say is: crazy freakin' 2020. It's the Apocalypse, don't you know!

So, what better time is there to check out DICE ROLL ZINE #3 in print before everything goes to shit?!?

DRZ #3 was launched as part of Zine Quest 2 on Kickstarter early in 2020, and I now have print copies available for those who didn't know about or weren't able to back the zine during the campaign. Details below.

Or you can use this link to the Anchor podcast.

In this podcast episode I delve deeper into the Old School Essentials Classic Fantasy Rules Tome (the Player Characters chapter) and come out the other side with some intriguing thoughts (in particular) about ability scores and alignment.

Or maybe I just kinda talk out of my ass for like 35 minutes. 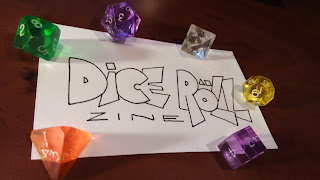 If you're interested in supporting me and Dice Roll Zine #3 on Kickstarter's Zine Quest 2 campaign, please check it out and join in the fun and exciting journey of bringing the latest issue of my old school zine to the people!
Posted by Steve C at 4:49:00 PM No comments:

I'm about to resume my B/X Essentials (well, actually now it's Old School Essentials!) RPG game, tentatively known as the "Gloomburg" campaign, which is set in a very Solomon Kane-Warhammer-The Midderlands-Symbaroum-ish blender campaign setting called the Border Ghostlands, with places named appropriately spooky things like Gloomwood, Daghold, Blackspire Peaks, Gloomburg, Blackhaunt Forest, Mistwood, Moontower, and so on and so forth. All very Doom Heavy Metal-ish and Nordic, I suppose.
At any rate, I've needed a very loosely "Solomon Kane-ish" type class to help fill in some of the setting vibe, so this is what I've come up with. Feel free to let me know what you think! I've done very limited playtesting so far, so it's likely to continue to evolve (see notes below for changes). Hat tip to JB of the B/X Blackrazor blog for some of the original inspiration for this class, his Witch Hunter from a-way-way back in 2010.
http://bxblackrazor.blogspot.com/2010/04/bx-witch-hunter.html

The witch hunter stands a beacon of light in the darkness against witchcraft, demonology and sorcery. His martial prowess and divinely-granted powers aid in his quest to protect the innocent and destroy evil. (More fluff text to be added later.)

Requirements: STR 9, WIS 9, CHA 9
Prime Requisite: WIS
HD: 1d6 (+1 per level after 9th level)
Max Level: 14
XP: as fighter
THAC0: as fighter
Saves: as cleric
Weapons: all 1-handed melee, crossbows, firearms
Armour: leather, chainmail, shields
Hunter of Evil: Can hide in shadows and move silently as thief of equal class level (if wearing leather only).
Limited Possessions: May only keep wealth and possessions that they can carry (or pack on mount). Excess must be donated to charitable groups that protect the innocent, or groups devoted to eradicating witchcraft and sorcery. Donating to other PCs forbidden.
Protect the Innocent: Sacrifice a number hit points to provide an equal bonus to allies/innocents on saving throws vs evil magic. Lasts 1 hour if protected in advance or allows a new save on existing spell effect at double bonus. Subjects must be touched.
Repel Witchcraft & Sorcery: Can turn demons, devils, magically summoned creatures, and evil spellcasters like a cleric turns undead.
Thwart Magic: Can detect magic like the spell 1/day per 5 levels (1-5/x1, 6-10/x2, etc.), and can dispel magic or remove curse like the spells 1/day starting at 5th level (2/day at 10th level and higher).

Tracking: Can track like a ranger of equal class level.

It's my Birthday so I'm having a sale on Hog Town Games' titles! 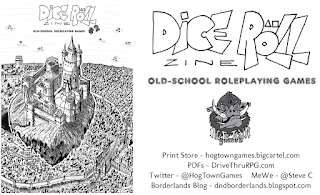 Get yer old school game on!

Enjoy the rest of the summer folks!