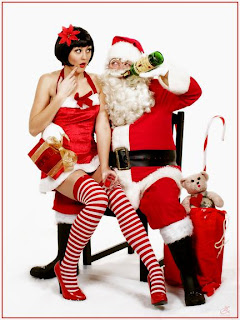 Merry Christmas and Happy New Year to all!

Santa especially deserves some time off and fun before the year wraps up ... what with all the travel and list-checking and paparazzi and whatnot.

So I hope you all enjoy the season too, in whatever ways make you happy!
Posted by Steve C at 9:30:00 AM No comments:

The Hobbit: Battle of the Five Armies 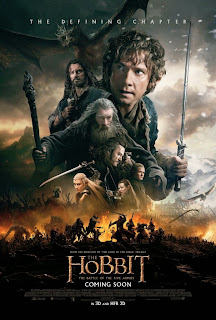 Just got back from a matinee screening of The Hobbit: Battle of the Five Armies.

A few random thoughts on the movie, in no particular order ... I've had a couple eggnogs since seeing the movie, so don't expect anything too intelligent! And please note this is not an actual review! OK, maybe it is a review ... of sorts.

SPOILER ALERT - I think we all know how it ends, but nonetheless, you have been warned. :-)

Smaug gets killed before the subtitle "Battle of the Five Armies" appears. Wow. No preamble. They pick up right where film two left off. Smaug obviously burns Lake Town to cinders but gets heroic black spear-killed by Bard with a makeshift bow in the town bell tower, with the help of his son. I liked this early kill off, and it set a good pace for the film.

Can someone shut Tauriel up please. Whiny elf. She goes through some kind of emotional journey or something apparently during the three films. Maybe Evangeline (spelling?) Lily is just a bad actress but I couldn't buy into it at all. The whole Kili-Tauriel relationship is so forced. I hated the Tauriel character from the start and she doesn't get any better during this film. Near the end I could hardly keep from rolling my eyes when she cries to Thranduil about why it hurts so much after Kili gets ... well, killed. Because its real, Thrnaduil replies. Pul-lease! *barf*

The White Council rescues Gandalf and confronts the Ringwraiths and Sauron at Dol Guldur. Very cool scene, loved it! Saruman and Elrond kick some wraith ethereal ass for the most part and then Galadriel goes all Hot Dark Elf Chick (makes sense when you see it, remember Fellowship? But better!) with turned up to 11 magic powers on Sauron and blasts him (presumably) off to Mordor. Someone should do a Tolkien Mirror Universe movie so we can see Nasty Gladdy more. :-)

Sandworms of Dune! Oh wait ... I mean Giant Toothy Rockworms of the Misty Mountains! These big critters eat tunnels through the mountains to get Azog's army to the Lonely Mountain on the sly, sneaky-like, except when they shake the earth and bust a rock chew move and everyone goes gaga ... and then they promptly saunter back down the tunnels. Pretty spectacular visuals, but I don't recall those things from the Hobbit book. lol If I was Azog, I'd be like WTF! Hey, wormies, get the heck on the battlefield and eat the damn way into the Lonely Mountain for frig's sake! Big enough plot hole to drive a tunnel eating mountain worm through. But anyway ... It's all good and it's a pretty freaking cool moment at the start of the battle.

Dain Ironfoot leads his dwarf army into the battle riding a pig-boar beast. I loved this character. He's exactly how I (and many others) like to play dwarves in D&D. Loud, insulting and funny. He headbutts orcs in battle and kicks ass. Totally over the top, it's great!

Thorin death scene with Bilbo. Gotta admit, I got choked up a bit. Freeman and Armitage's acting is well done, with Thorin coming to grips with his regret over trying to have Bilbo killed (earlier in the film) and his impending demise, and Bilbo holding in his grief and being supportive to a dying friend but just enough grief spurts out that you really empathize with him. At least I did anyway. Good stuff.

At any rate, gotta head out for dinner with wifey, so will end here.

Overall, I like this (upon first viewing) film a lot better than the first two. It seems to hold together better overall and has a good mix of tension building, action and character moments. The Bard character plays a bigger role than Bilbo, it seemed to me, which I found a bit odd considering it's called The Hobbit, but your mileage may vary on that part. It's not so much that Bilbo is put in the background as Bard is brought to the foreground for much of the film.

If you managed to make it this far without wanting to hit me ... I give The Hobbit: Battle of the Five Armies 3.5 gp out of 5. It would be a 4.5 gp regular fantasy film, but considering it's Tolkien and Jackson and the writers have so needlessly butchered and re-arranged much of the good professor's works for "makes for better film and we need other characters bullspit", that I can't give any higher rating than that! :-)