Heroic dice are extra dice you may use in place of poor or undesirable dice rolls. They represent a well of inner resolve, an unrelenting drive, a will to succeed, or simply sheer blind luck that distinguishes adventurers from everyone else.

When you make a bad roll, you may declare to the referee you are spending a Heroic Die to re-roll a single die. A Heroic Die may be any die type and may be spent in any situation—attack roll, damage roll, saving throw, proficiency (or skill) check, and so forth.

You may only spend one Heroic Die on any single bad die roll—you cannot keep spending Heroic Dice to re-roll until you get a favorable result. If a Heroic Die roll is equal to or worse than your original roll, use the original roll. However, that Heroic Die is still spent.

You gain more Heroic Dice to spend as you gain levels. Heroic Dice refresh at the start of each day.

This is a pretty straightforward house rule I've encountered in many variations over the years. Some referees divvy them up into specific pools for spellcasting or combat, and others call them luck dice, drama dice, fate points and such.
Posted by Steve C at 10:04:00 AM No comments:

Back in April, Chris at the Aspiring Lich blog wrote about a Save vs Awesome option for use in old-school games. I liked it.

His option started me thinking (uh-oh!) about other ways to inject awesomeness into combats a little more frequently, and I came up with this little idea: the Throw Down.

Basically, the Throw Down is used when you (or a referee's big NPC baddie) want to single-out an opponent and gain a bonus against that opponent. Think of it like the proverbial "throwing down the gauntlet" and calling out a foe. It's also meant as a means to encourage roleplaying and add drama to a combat encounter.

While thinking about it, I recalled that 4th edition D&D had a fighter class feature called mark or challenge (or something like that). Throw Down works along those lines, but provides you the bonus; it does not impose a penalty on your foe.

THROW DOWN
You single out a foe with a clever insult, flash of steel, guttural roar, or some act of derring-do. You choose one of your ability scores (appropriate to the way you call out your foe) and roll a contest against your foe, who must use the same ability score. (Depending on the game system you are using, this could be a d20 + ability modifier contest or a "roll under" ability score contest. Either way the result is the same.)

If you beat your foe on the contest roll, you gain a +1 bonus to attack rolls, damage rolls, saving throws, and ability checks directly involving that foe for the rest of the encounter. If you attack or try to harm any other foe (other than casting an area spell which includes the designated foe) after you have won a throw down, you immediately lose your bonus.

If you lose the contest roll, nothing good or bad happens to you. You throw down but your foe has better moxie.

Plenty of Options: The throw down bonus doesn't need to be a simple +1 to numerous rolls. A referee might allow an extra damage die on attacks, maximized spell effects, an improved initiative bonus, temporary hit points, or other similar benefits.
Posted by Steve C at 4:49:00 PM 2 comments:

It has been entirely too long since my last post!

Just a quick note today to praise the coolness of my two (well, three) most recent OSR purchases.

Warriors of the Red Planet by Al Krombach and Thomas Denmark (see the WotRP blog) is a crisp, lean, old-school rules guide for games of the Sword & Planet genre. I've been reading through this the past couple of days and I can say without doubt that this 134-page booklet-sized paperback (color cover, black & white interior, perfect bound, available from Lulu) has me all jazzed up for leaping from airship-to-airship, slaying evil Black Martian baddies, ripping the blonde wigs off Therns and rescuing me a hot Red Martian princess. Excellent work gentlemen. 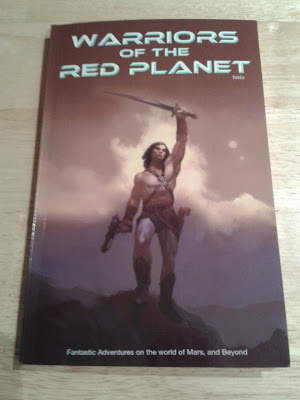 The d30 Sandbox Companion and d30 DM Companion by Richard LeBlanc are both fantastic accessories for the overworked and under-appreciated referee. These two saddle-stitched paperbacks (black & white interiors with mono-color covers, available in PDF from Drive-Thru and PoD from Lulu--see links above) weigh in at 52 and 36 pages, respectively, and provide a plethora of random tables (all of the cool d30 variety!) to generate damn near close to everything you could expect to generate during a game session--random ruins, settlements, NPCs, temples, monsters, weather, treasures, even entire adventures. You name it and it's in there. These two books will feature prominently in my next sandbox game and I highly recommend them both.

That's all for today, next up will be a post discussing the sandbox game I just mentioned. :-) 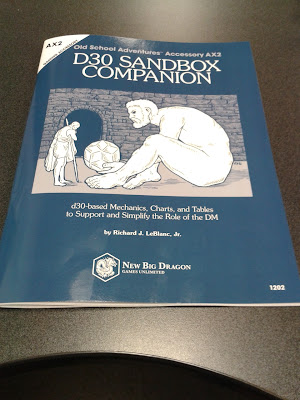 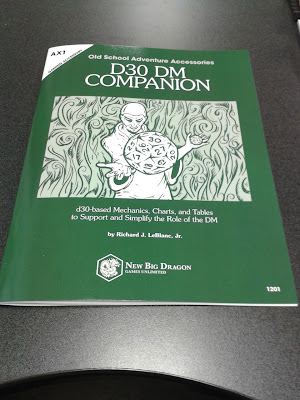